Understanding human behavior - especially how it relates to love and romance - is important for the romance novelist. Here are some links so you can avoid real writing...

"Romance novels also can provide opportunities for learning about adult loving relationships," says Dr. Bill Emener on his blog, Dr. Bill's Harley Wisdom. Emener has been a licensed psychologist for 33 years and is the author of self-help book Adult Loving Relationships, and romance novels Fear of Feeling Loved and My Sweetpea: Seven Years and Seven Days.

In his post, Emener talks about three distinct stages of adult loving relationships and how they relate to real life as well as romance novels. Check it out.

John Bowlby believed psychoanalytic view that early experiences in childhood have an important influence on development and behavior later in life. Our early attachment styles are established in childhood through the infant/caregiver relationship. In addition to this, Bowlby believed that attachment had an evolutionary component; it aids in survival. He devoted extensive research to the concept of attachment and came up with his own theory, which you can find here. Click here for more on Bowlby's Attachment Theory.

The people we're most attracted to are those who have a blueprint that complements our own. We're looking for similarities of experience but, more significantly, we're also looking for differences. Read more about the Unconscious Fit.

How to be romantic.

Romance 101 includes articles on Manhood, Murphys Laws On Sex, and Intimacy (short, but makes a good point for writers).

What about you? Got any tips on romance?
Posted by Nienke Hinton at Friday, January 26, 2007 5 comments:

Thought I'd post some pictures of my furry baby collection. Just because. 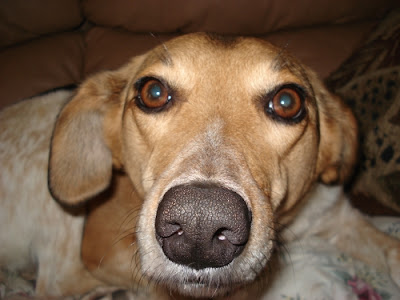 This is my australian cattle dog/hound mix, Piffy (short for Epiphany). She's 7. We got her from a border collie rescue mission that saved her from euthanasia when she was 2. She had been stray before that and was very, very skinny. She's not so skinny anymore. 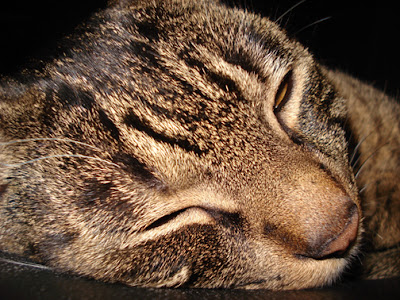 If you're a regular reader of my blog, you may remember we adopted an abandoned cat in July. This is Cairo. He's just over a year now. 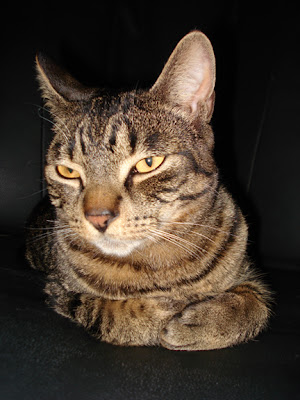 Another picture of Cairo. 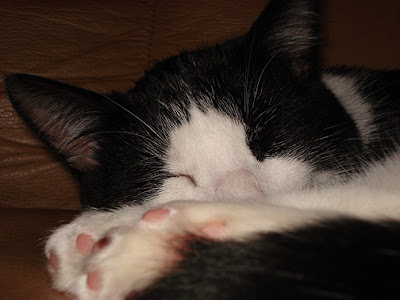 This is Suki, another abandoned kitty we took in during October. He was 10 weeks then, so he's about 5 or 6 months old now. He is so soft and cuddly. He's also gained about 10 pounds since then. 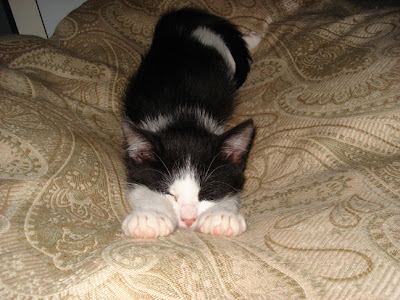 Another Suki post (this one's older from November when he was still closer to 2 pounds).

Who else has pictures posted of their furry babies? Share your link so I can check them out. 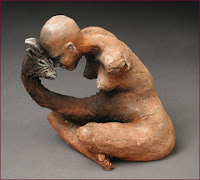 So, I’ve done some research to try and understand the concept of inner conflict a little better. My main issue was whether or not you could – or should – have inner conflict independently of external conflict. It seems the two are more intertwined than I thought. Which, BTW, will make writing a little easier for me.

The Ottawa-Carlton District School Board English 4U Student Handbook says, “Inner conflict refers to emotional or analytical struggles a character has due to his values, his role in society, or the company he finds himself with. For example, Willy Loman cannot emotionally ignore his failure as a breadwinner, failure as a faithful husband, and his failure to bring up decent sons.”

Redchurch says, “The best advice I've read says that where you can, try to link the inner conflict with the external and interpersonal conflicts.” He also says, “Someone being forced to compromise their values of honesty is an inner conflict. But, it is externalized if they are forced to confront a corrupt police force, for example. Their inner conflict is smacking right up against something going on in the world. If it's just their inner conflict by itself, it's not as powerful as when some external factor or force creates conflict based around the character's inner values.”

Mary Casanova says, “We all struggle. We carry around inner conflict in the private places of our hearts where we search for our identity; we struggle with ego, pride, and jealousy; we cry out for love and yearn to be heard; and we try to listen to the small, still voice of God. The heart is a place of darkness and light, often in conflict with itself. It is from the heart that conflict originates and resolution emerges, and in the heart that change and personal growth occur.”

Caro Clarke says, “Conflict is opposing desires, mismatches, uncertainty, deadlines, pressures, incompatible goals, uneasiness, tension. We are all caught up in some of these conflicts every day. And, so should your characters. A convincing story has many conflicts built into it, layered and connected. The first layer is inside your characters. Once you know what these are, you can use them to make the conflicts between the characters more convincing and interesting.

“A character's inner conflict is not just being in two minds about something, not just being torn between obvious incompatibles (“I want to be a priest, and yet I love her”) but is about being in a new situation where old attitudes and habits war with and hinder the need for change. For instance, a man who drives himself to succeed because he doesn't want to be like his happy-go-lucky father is suddenly confronted with a situation where he isn't winning. Or an executive discovers that her ambition to be vice president of her company is being thwarted by her own self-doubt. This war inside each of your characters makes them act and react in complex ways.

“You show these internal conflicts not by means of internal dialogue (which is a cop-out and is dull), but by showing your characters responding to their own inner compulsions. She, for instance, decides to confront her own self-doubts by taking on a no-win project where the local people are opposing a development. She is determined to be hard-nosed, prove she's vice-president material. He is always confrontational, fearing that one minute of negotiation would be the first step to becoming a wimp like his father. You have a grade-A opposites-attract situation here, yet it is believable because we understand why each of them is acting the way they do, why they are foolishly stubborn, by it's important for each of them to win.

“A character's inner conflict can be between what he thinks he wants and what he really wants… Conflict must always be resolved, and every layer you create needs its closure. A satisfying and economical way of achieving this is to use one big knot to close two or more conflicts together in the same action or in a double whammy, where one leads ineluctably to the next.”

Finally, Michael Hauge says, “WHAT IS YOUR HERO'S DESIRE? What compelling goal does your hero HAVE to accomplish by the end of the movie, and why does he desperately want that? The answer to these questions will define your story concept, propel the plot forward, give the reader a specific outcome to root for and lead you deeper into the inner motivations of your character.

“WHAT TERRIFIES YOUR HERO? On the plot level, this question will force you to determine which obstacles the hero must face to achieve his objective -- what's at stake for him, what's he up against and which conflicts will give the story its necessary emotion? And on the level of character growth and theme, your hero's emotional fear will reveal his inner conflict: the wounds from his past, the identity he clings to, the risks he is desperate to avoid and the arc the story will lead him through as he finds his necessary emotional courage.”

Thanks everyone, for your comments, which basically said: “Just write already!” So, off I go.

I've been working on my WIP and, while I write, I'm not concentrating at all times on my characters' goals, motivations, and conflicts. Is this something for the second draft? Should I plot more extensively before I write?

Also, what is your definition of inner conflict (vs. external conflict) and can you give me an example?

IMHO, these are worth checking out...

Storybase.net
The Paris Review - Interviews
Novel in 90 Days (LiveJournal group)
Whole Writing (redchurch - I think you'll like this one)
Angela Booth's Top Ten Writing Tips To Help You To Write More
POWER POPP! - dedicated to helping people realize their dreams. Success lies in wait for those who plan, organize, pursue, and persist.
Poynter Online Ten Paradoxes of the Writing Life

Okay, that's enough. Get back to work.
Posted by Nienke Hinton at Thursday, January 11, 2007 8 comments: 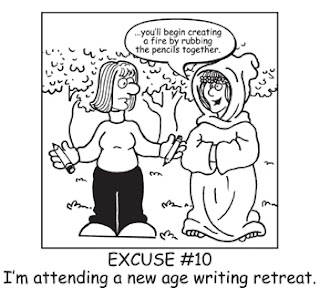 Reprinted with permission from 101 Excuses Not to Write.
What do you do to keep yourself motivated with your writing?
Posted by Nienke Hinton at Friday, January 05, 2007 12 comments:

Happy New Year to all!

Every year, I make a list of all aspects of my life and how I want to improve them. I've written about this before, and every year the list includes writing more.

I've learned a lot about myself as a writer this past year, so now it's a matter of putting a plan into place. Like my most recent post addresses, right now I'm learning about structured writing processes versus organic writing. This issue is not unlike plotters versus pantsers. I thought I was a total plotter, but my recent experience with a story that had to come out has make me rethink my whole strategy. For me, what it comes down to is finding what will make me want to keep writing. I still think plotting is important, but perhaps my Virgo side took over and I need to learn to relax a little. The bottom line: GET THE FIRST DRAFT DONE ALREADY.

So, my writing goal? To get the first draft done. I'll be setting a deadline and plan of action and try to keep away from my incessant desire to research, plot, and build story lines.

On another note, I watched some of the Rocky movies yesterday. One channel had a marathon featuring Rocky I to V. Every time I watch these movies, I am so impressed with the writing (by Sylvester Stallone). True, the plot is simple, but Stallone does a great job in creating characters with desires and needs, plotting, and remembering the audience can figure things out for themselves. I find his writing almost textbook well done. And, with each movie, he develops his characters further. So now I'm dying to see the newest installment, Rocky Balboa. I've heard it's pretty good... anyone seen it yet?

So, my questions to you: Any writing resolutions? Did you like Rocky Balboa and why?
Posted by Nienke Hinton at Tuesday, January 02, 2007 17 comments: